If the severe spike in oil prices takes place – radical leftist win.  They can now take over the oil industry (like communism).
The rapid move to a non-fossil fuel world needs a catastrophe to make it happen for radical leftists.   A price
spike is the same as ten feet of seal level rise.  Equally good reasons to take away the fossil fuels.

THE BEST OIL PRICE UPDATE …. EVER

And, we paid the price for that “higher forever” philosophy.   We actually made it economical to
produce oil from source rocks, and we found better and better ways to produce that shale oil.

From November 2014 until now, October 31, 2017, the oil industry has undergone one of the most
severe downturns ……. ever.  There is that word again – longest run of high oil prices ever, and
most severe downturn ever.    What is going to happen next that will employ the use of the term
“ever” ?

I submit, that what the oil consuming world is set up for next, is the most severe price spike ever.

In late 2008, oil prices fell from $140 to $38 essentially over night, as a result of the Global Financial
Collapse.   But, OPEC cut production by 4.2 million barrels per day and the oil price recovery came fast and resulted
in the longest run of high prices ever.

One of the things that kept prices high was the “fear premium” built into the oil price.    Instability in the
Middle East and the Arab Spring turning into the Al Qaeda/ISIS spring caused the fear.    But along comes US shale
oil production, and the “fear premium” subsided.

The instability in the Middle East that caused the fear premium did not go away, but the increased
US shale production acted as an insurance policy – that no matter how bad things got – there was
a new large supply of oil that could keep a cap on prices.   The fear of what would happen in a supply cut-off was gone.

So, the fear premium goes away at the same time that OPEC, namely Saudi Arabia, decides to cut the oil price
to drive domestic shale companies out of business

Things change on a grand scale, and the change seems to just happen while we are
not paying attention.  Some say, or hope, that the shift in the energy industry
will be a move toward electric cars and a drop in demand for oil.  That will happen – when oil becomes really scarce
and really expensive.  Probably some twenty years from now.

What has been happening recently in the oil patch, is that demand has been relentlessly going up.  Increased demand to the
tune of 1.5 million barrels per day has happened each year of this downturn, and now the economy is heading back to full
strength.  Three years of downturn, 1.5 MMBPD equals a demand increase of over 500 million barrels per year for
three years.   Over 1.5 billion barrels of new oil that is needed to meet demand.

The 1.5 billion barrels of demand increase is conservative.   The current estimate for increasing demand is 1.7 MMBPD.
Either way, demand is being met by production, and increasingly by storage drawdown.

The fear premium will rear its ugly head as soon as the global inventory gets close to what is considered normal.
When the oil storage glut is reduced.   And … that is happening now.

The lack of long term investment in new projects throughout the worldwide oil industry will result in a supply squeeze at the
same time as the fear premium and storage drawdown occurs.  That is the recipe for a price spike.

Maybe the biggest price spike ever.

(Side note:  As for natural gas  -  we are of the opinion that our winter weather will return to the cool side of normal, and that
means higher natural gas prices.  In the near future, we will be talking about a shift in global temperatures to the cool side
and the effect that shift will have on commodity prices – especially natural gas.  Say goodbye to El Niño and hello to colder winters).

THE RISE IN OIL DEMAND WILL HAVE TO BE MET

This graph is all you really need to know about the  oil market.   With the OPEC cuts,
there is more oil used than is being produced.    So, the large worldwide inventory is slowly being
drawn down.

With the severe drop in oil and gas investment over the last two years, the inventory overhang
will evaporate – and we will be in deficit.   That creates the oil price spike that comes after the
crash.    That is how it happens.  We are not gleeful about this inevitable event  -  we are
just realistic.

For years now, it has been China’s increase in demand that has driven the oil  story.  Soon it
will be India.   World demand will soon be 100 million barrels per day.  We will need a lot
of exploration to feed that beast. 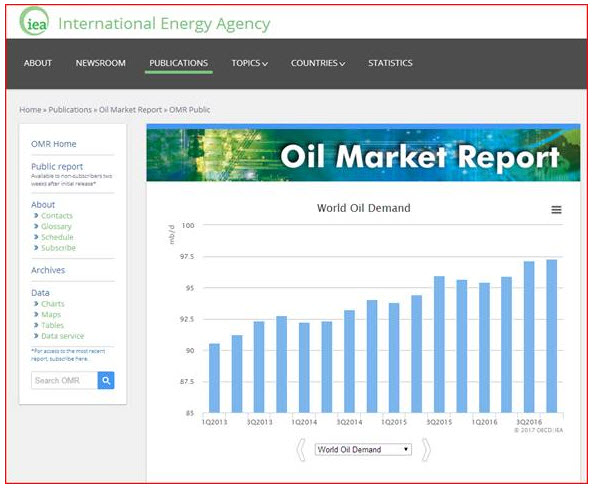 Posted by Jack's Corner at 2:19 PM No comments:

Happy New Year for all the AmericanOilmen out there! 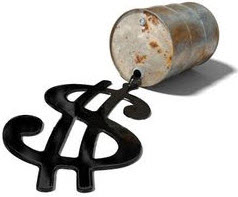 Oil is trading in a channel between $55 and $45.   We feel the bias is
to the upside.   The conditions that support higher prices are:

1) OPEC seems to have decided that enough is enough.  Everyone has been
reporting the death of this cartel.   Well, no one was saying they were dead
when oil prices collapsed for the last two years.   They directed this severe
drop in prices, and they aim to direct the coming price recovery.  OPEC has
calculated how much damage was done to oil projects in the world, and it
is their opinion that demand increase will now keep prices higher, even with
increased production.

2)  There is turmoil in the Middle East.   There is ALWAYS turmoil there, but
the sense, now, is that it is different this time.  The Middle East instability premium
could very soon return to the oil market.

3)  There is turmoil in many other parts of the globe.  This, too, is supportive of
higher oil prices.

4)  There could be economic growth as a result of the recent US election.   Oil
demand is growing by 1.3 million barrels per day and with economic growth this
number could go up.  This will result in a very quick return to balance in the oil
market.

We at AmericanOilman believe we have seen the bottom in oil prices, and
there is a likelihood that we see a modest increase from here.   The risk in the
market is to the upside, because of the four items listed above. 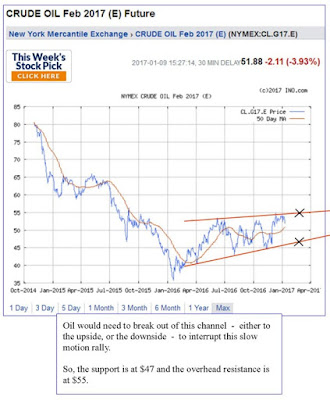 Posted by Jack's Corner at 3:50 PM No comments:

An oilman for Secretary of State.    The one thing you can say about Tillerson, is that

he has no government service experience.   None.   And that is his biggest asset.

He has been on the hot seat at the other side of the table  -  listening as the
government has berated the oil industry as if we are some government owned
entity.

Along with the new EPA chief, we can expect a business man or woman’s perspective
on regulation, permits and an application process that takes years instead of weeks.

Over
Posted by Jack's Corner at 3:00 PM No comments:

We are awakening to the end of socialism in our country and it will not end without protest.

The vote tally as the night wore on Tuesday was the bigger protest.   The strong,  quiet
majority – no longer silent – but quietly voting.  The giant, gentle protest.

Over
Posted by Jack's Corner at 3:59 PM No comments:

The Great 2014 Thanksgiving Day Oil Massacre may be bottoming out, and 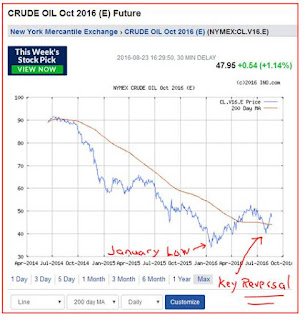 a new major upturn in oil price, and oil companies in general, may have
just begun.

By the time this new upturn has put the downturn away, it will have been a
brutal two years of oil industry devastation.   The chart below shows
the waterfall decline in 2014.  It also shows the “key reversal” that is just
now playing out.

This reversal was the big test for oil price and  might be signaling the future
direction of oil for the rest of this decade.   The low from the first of this month
resulted in a sharp, “V” reversal and this low was a “higher low” than the bottom in
January.

So, January’s low is confirmed as THE low.  Now we need to see the current
“V” shaped low hold as a test of the 200 day moving average.   We expect
gradual recovery from here – not a moon shot up in oil price.

Good luck to all American Oilmen.

Posted by Jack's Corner at 9:50 AM No comments:

Jack's Corner
An Oilman's view of the world.